The Petronas Twin Towers in Kuala Lumpur, the capital of Malaysia, were the tallest buildings in the world from their completion in 1998 until 2004, when Taiwan’s Taipei 101 skyscraper captured the honor.  Nonetheless, they remain the tallest twin towers in the world, and they stand as an unintended symbol of Malaysia’s economic power structure – an alliance of a government dominated by its ethnic Malay and an economy dominated by its ethnic Chinese.  These two – the Malay government and the Chinese business community – are the real Twin Towers of Malaysia. 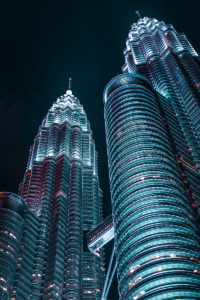 Ethnically, Malaysia is a heady mixture of people.  Its current population of 29 million is about 50 percent Malay, 24 percent Chinese, 7 percent Indian, and 18 percent various others.  Its first inhabitants were indigenous peoples who migrated to the Malay peninsula from southeastern Asia.  Because of the peninsula’s strategic sea-lane position, trade and foreign influences soon took hold.  Hindu and Buddhist cultures from India were prominent in Malaysia’s early history, but the Islamic culture became established in the 15th Century and has had a profound influence on the Malay people.

In the 15th century, as a result of the rich silk and spice trade between Europe and Asia, the port of Malacca (on the west coast of Malaysia at the Straits of Malacca) became an important trading center.  At first, Portuguese traders controlled Malacca, then Dutch traders, and finally the British.  Gradually all of Malaysia came under British influence and control.

Chinese and Indian workers migrated to Malaysia to meet the needs of the British colonial economy, and the country’s trade and industry thrived.  Except for three years of Japanese occupation during World War II, the British continued to control Malaysia (which they called Malaya).  Following the war, the British hoped to unite its Malayan possessions into a single British crown colony (to include Singapore to the south and Sabah and Sarawak to the east), restoring governance to their rulers but with British protection.  However, opposing Malay and Chinese factions and a nationalist movement born of the disruptions of World War II, frustrated that plan.  After much dissention, the Federation of Malaya was formed in 1948.  It declared its independence from Britain in 1957 and reconstituted itself as Malaysia in 1963.  (Singapore was originally one of 14 states of the Federation, but it withdrew in 1965 to become an independent republic.) 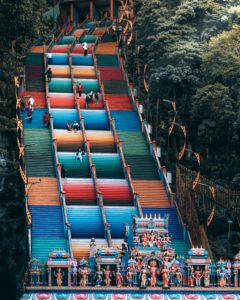 The new Malaysia retained a unique royal component of its government.  Malaysia’s 13 states are comprised f nine sultanates, governed by the heirs of the sultans who once ruled them as kingdoms, and four states governed by heads of state appointed by the government.  Every five years the hereditary rulers of the nine states elect one of their members to serve as the King of Malaysia for the succeeding five years.  The King “rules” on the advice of a cabinet led by a prime minister.  In practice, substantial power is exercised by the prime minister and the cabinet ministers.

From the outset, the new government suffered from a sharp division of wealth between the Chinese, who controlled a large portion of the Malaysian economy, and the Bumiputras (Bumiputra is the Bahasa Malaysia word for the country’s ethnic Malay and other indigenous people), who were poorer and more rural.  With economic power in the hands of the Chinese and political power in the hands of Bumiputras, Malaysia was fraught with racial tension in its early days.  In the run-up to government elections in May 1969, passions were inflamed by politicians seeking special privileges for Bumiputras, and race riots broke out in which hundreds of people were killed by rioters, police and Malaysian military personnel.

Following the riots of 1969, the government introduced various affirmative action policies to enhance the status of Bumiputras and promote a more equitable distribution of wealth in the country.  In 1971, the government adopted, and continues to maintain, policies that give Bumiputras preferential treatment in employment, education, scholarships, business, access to cheaper housing and assisted savings.  In addition, it targeted a 30 percent share of the country’s economy for transfer to Bumiputras (in part by requiring that 30 percent of new public offerings of corporate equity be set aside for Bumiputra investors), thereby diluting economic power held by Chinese Malaysians and others.

The government’s special treatment of Bumiputras inevitably sparked envy and resentment on the part of Chinese Malaysians and other ethnic groups such as Indian Malaysians.  Today locally owned sectors of the country’s economy have been largely ceded to Bumiputra control in many essential or strategic industries such as petroleum retailing, transportation, agriculture and automobile manufacturing.  However, the government’s aggressive and successful economic development policies to date have produced enough growth to satisfy the commercial appetites of all. 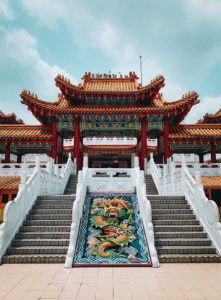 Malaysia grew steadily during the last half of the 20th Century as an export-led economy and continues to bea major supplier of tin, rubber, palm oil, timber, and oil and gas products to industrialized countries.  In addition, since the 1970s, its manufacturing sector has produced a range of export-oriented goods such as textiles, chemicals, pharmaceuticals, electronics and rubber products.  It is one of the world’s largest exporters of semiconductor components and devices, electrical goods, solar panels, and information and communication technology products.  Its oil and gas sector is also strong, currently providing more than 40 percent of government revenue.

Foreign and domestic private investment played a significant role as Malaysia’s economy diversified and modernized to become a multi-sector economy based on services and manufacturing.  But the government itself deserves credit for emphasizing continued development of the manufacturing sector and investing in a substantial build-up of the country’s infrastructure.  In addition, the government continues to support free trade, steadily lowering trade barriers in recent years and participating in a number of free trade initiatives as a member of the Association of Southeast Asian Nations (ASEAN) and the Asia Pacific Economic Cooperation forum (APEC).

While Malaysia has succeeded in maintaining a delicate ethno-political balance with the help of an expanding economy, its affirmative action policies on behalf of Bumiputras nonetheless comes at an economic cost.  These policies have hampered labor market efficiency, productivity, capital formation and enterprise development.  In addition, with the rise of China’s economy and global influence, policies that favor Bumiputras at the expense of Chinese Malaysians have constituted an unmeasured but palpable impediment to trade and other relationships between the two countries.

The Petronas Twin Towers in Kuala Lumpur stand as a testament to the economic success of Malaysia.  The Malaysian economy’s Twin Towers – the Chinese business community and the Malay government – are also tall and impressive.  The Chinese tower lost some height to the Malay tower after 1971, but it just might gain it back in the years ahead with a little help from the rise of China.