Singapore is a small nation situated at the southernmost tip of the Malay Peninsula, across the Strait of Singapore from Indonesia’s Sumatra island to the southwest.  The nation consists of Singapore Island and some 57 smaller islands comprising a total of 269 square miles, less than Hong Kong and only about three times the size of Washington, DC, in the United States. 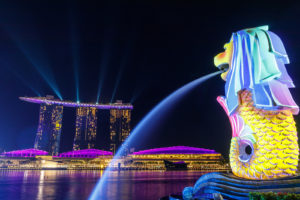 At the entry to Singapore’s harbor is a large sculpture of a lion’s head – a Merlion, themythical creature with the head of a lion and the body of a fish that serves as Singapore’s mascot and national symbol.  According to a 13th Century collection of writings known as the Malay Annals, an Indonesian prince from the South Sumatra capital city of Palembang, was shipwrecked and washed ashore to the island that is now Singapore.  There he saw a creature that he thought was a lion, and he named the island Singa Pura, which means “Lion City” in his language, the Malay language.  The name stuck, as did the symbol of a lion’s head which, according to Singapore’s government, symbolizes courage, strength and excellence, as well as resilience in the face of challenges.

Those attributes are clearly evident in Singapore’s history and its present-day economy.  With virtually no natural resources other than its deep water port,

Singapore today is considered the primary financial center and high-tech hub of Southeast Asia.  It is largely an exporting nation, its industriesare especially strong in international trade, financial services, consumer electronics, information technology, chemicals and pharmaceuticals.  It is strategically positioned near Asia’s busiest shipping routes, and itsport is one of the busiest in the world in terms of containers and tonnage handled. 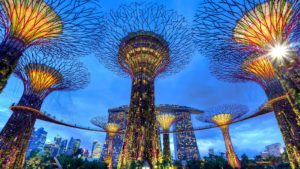 In recent years, Singapore’s economic success has produced a tight labor supply and higher wages.  As a result, the government has shifted its economic policies to discourage investment in labor-intensive activities and to promote technology-based, value-added manufacturing and services.  Fittingly, its financial services sector has been a growth leader, and high tech manufacturing continues to advance.  Singapore even has an offshore industrial development joint venture with the Chinese government in Suzhou, China, called the Suzhou Industrial Park.  In addition, Singapore’s growing wealth has enabled it to expand its economic base with direct foreign investment elsewhere, primarily in Southeast Asia. 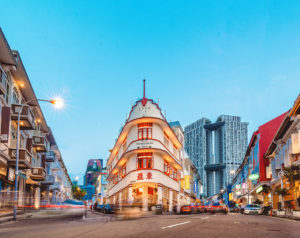 Singapore is a tightly managed society.  This is no helter-skelter growth economy.  Instead of frenzied business activity, there is deliberately implemented central planning.  Public and private affairs alike are overseen by a visionary, hands-on government that leaves nothing to chance and involves itself deeply in the affairs of its business community, its people and their welfare.   The government provides funding and participates with private industry in implementing economic projects.  And citizens are often told how they must comport themselves and what, when and where they must do or must not do.  For example, voting is compulsory, saving a part of one’s salary is mandatory, automobiles may not be over ten years old, and there are fines for littering and spitting in public.

Singapore was founded by Sir Stamford Raffles in 1819 as a trading post for the British East India Company.  Except for almost four years of Japanese occupation (1942-1945) during World War II, the British continued to fully control Singapore until it took steps in 1946 to establish Singapore as a Crown Colony of Britain with a governor and legislative council.  Thereafter, the British gradually transferred increasing levels of self-governance to Singapore until in 1959 Singapore became an independent nation with Lee Kuan Yew elected as its first prime minister. 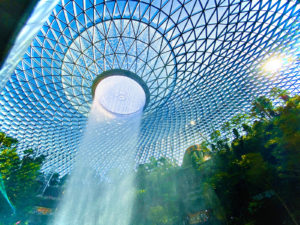 There was a merger of Singapore and Malaysia in 1963 when the two countries, envisioning numerous advantages to a union of Singapore’s trade capabilities and Malaysia’s resources, formed the Federation of Malaysia.  But the merger between these two countries with significant ethnic differences – Singapore being predominantly Chinese and Malaysia predominantly Malay – did not last.  Political and racial tensions between the two countries, incited by an ultra-nationalist faction of the United Malay National Organization, and groups of ethnic Malay and Communist provocateurs, soon led to numerous confrontations and riots.  The most notorious riot occurred in Singapore in July 1964 on the birthday of the Prophet Mohammad when 36 people were killed and hundreds injured.  With no end in sight to the bloodshed and disharmony, the Malaysian prime minister, Tunku Abdul Rahman, sought to expel Singapore from the Federation, and in 1965 the two countries agreed to a separation.

Lee Kuan Yew, who led Singapore as prime minister for three decades until he retired in November 1990, was a significant force in the rise of Singapore from a relatively underdeveloped colonial outpost to being one of the four “Asian Tigers.”  (The term Asian Tigers was used by international media to refer to Singapore, Hong Kong, South Korea and Taiwan as nations notable for maintaining exceptional growth rates – averaging in excess of seven percent – and expanding industrialization from the 1960s to the 1990s.)  Lee, widely recognized as the founding father of modern Singapore, continued in government as Senior Minister during the administration of Prime Minister Goh Chok Tong (1990-2004) and then as Minister Mentor in the administration of his son, Prime Minister Lee Hsien Loong (2004-2017), until resigning that position in May 2011. 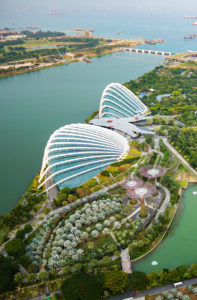 It was Lee Kuan Yew, together with Malaysia’s Prime Minister Mahathir Mohamad, who strongly promoted in the early 1990s a concept which they called “Asian Values” and believed justified authoritarian government policies, including active involvement in economic development.  They argued that the Asian values of collectivism were more effective than Western individualism values in producing social cohesion and economic development.  However, the concept lost steam during the 1997 Asian Financial Crisis when Asian values produced no easy solutions to international economic problems.

British influence is still felt in Singapore:  English, spoken with a British accent, is the principal language of business, government, and education; the legal and governmental systems are also based on those of the British.  In these respects, Singapore is similar to Malaysia, its immediate neighbor to the north, except that the ethnic composition of the population is about reversed.  Whereas Malaysia is 50 percent Malay and 24 percent Chinese, Singapore is 77 percent Chinese and 14 percent Malay.

The modernity and convenience of Singapore is striking today.  Its airport is one of the best in the world, but travelers are in and out of it so fast that they barely notice.  Visitors are whisked into the city by taxis along attractive, tree-lined highways with a fragrance of flowers and spices in the air, arriving at one of many modern hotels within a half hour.  Many will attend conferences in Singapore’s huge convention center.  They come away highly impressed with Singapore’s modern office buildings, modern subway system, cleanliness, and fine dining.

Critics of Singapore’s carefully managed society assert that it is over-regulated, that its pervasive governmental regulations dampen spontaneity and innovation, and that, while clean and efficient, it is also very dull.  But since leaving the Malaysian Federation in 1965 to become an independent republic, Singapore has forged one of the strongest economies in Asia, now boasting the highest per capita income in all of Asia and one of the highest in the world.  The discretionary income of Singaporeans is also high because government policies discourage spending money on various big ticket items such as single family homes and expensive cars – policies intending in part to control land usage and traffic congestion. Singapore’s tight government controls also provide a number of tangential benefits to foreign business people.  Intellectual property protection is good, there is virtually no corruption, and the bureaucracy is reasonably efficient.

To the ancient Egyptians, the lion was not only a symbol of courage, strength, excellence and resilience, as Singapore’s government describes its symbol of a lion’s head, but also of wealth.  As one of the wealthiest and economically successful nations in the world, perhaps the government should add wealth to its description of its national symbol.