An old Hong Kong proverb goes: “Register a business in the morning.  Open in the afternoon.  Have a profit by nightfall.”  New Yorkers who do business in Hong Kong, accustomed to “the New York minute,” have come to know “the Hong Kong second.”  Everything happens fast in Hong Kong.

One thing that deliberately did not happen fast in Hong Kong, however, was Great Britain’s “handover” of the country to China on July 1, 1997.  Hong Kong was, after all, a democratically governed country with a free trade economy being acquired by an authoritarian government with a socialist economy.  Even the negotiations for this dramatic change, starting with discussions during Prime Minister Margaret Thatcher’s visit to China in September 1982, took a long time.  But in 1984, Great Britain and China signed a joint declaration for the return of Hong Kong to China in 1997 as a Special Administration Region of China with a high degree of autonomy from China for fifty years except in foreign affairs and defense matters.

During its early history, Hong Kong was occupied by a string of Chinese dynasties.  In the early 1800s, Hong Kong and Guangzhou in southern China became the focus of a flourishing tea, silver and opium trade.  China, concerned with expansion of the opium trade in the region, drove British and other foreign traders out of Guangzhou in 1839.  The British took refuge at the port of Hong Kong and commenced the First Anglo-Chinese War 1839-42 (sometimes referred to as the Opium War).  The British ultimately prevailed in that war, with the Chinese ceding Hong Kong Island and the Kowloon Peninsula to the British in 1842.

International commerce thrived in Hong Kong from that time.  Commercial interests grew, and the British in 1898, to protect these interests, negotiated a 99-year lease from China of the New Territories, a large area immediately to the north of Hong Kong and Kowloon Peninsula.  It was the expiration of the lease of the New Territories that led China and Great Britain to negotiate and sign the joint declaration for the return of Hong Kong to China in 1997.  At the time of the handover, Hong Kong had been under continuous British rule for over 150 years except for four years of occupation by the Japanese during World War II.

Deng Xiaoping, the paramount leader of China at the time of the joint declaration, characterized the combination of China and Hong Kong as “One country, two systems.”  This phrase deftly captured China’s “One China” concept but acknowledged Hong Kong’s differences.  It also reflected China’s belief that the Chinese culture is even more important than its status as a single nation.

For a time, the joint declaration precipitated a capital- and brain-drain from Hong Kong, many fearing that China would dismantle the former British colony’s capitalist institutions.  Some well-to-do Hong Kongese relocated themselves and their businesses to Canada, the United States, the United Kingdom and other parts of the world.  Many talented business people left to seek their fortunes elsewhere. 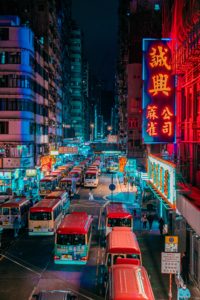 Despite these concerns, confidence in the commercial future of Hong Kong soon grew enormously.  One reason was that China’s own economy was growing rapidly since the joint declaration, tilting strongly in free market and private sector directions.  A second reason was that China signaled in various ways its intention to permit Hong Kong to continue its commercial activities.  It approved the construction of a new $6 billion airport and agreed to other infrastructure improvements.  A third and more telling reason was the importance of Hong Kong to China as an international trading and finance center.  About 45 percent of China’s trade now goes through Hong Kong, and Hong Kong functions as a point of entry for a significant portion of China’s new foreign investment.

Traditionally Hong Kong has been a city of small businesses.  It does have its huge conglomerates, like Jardine Matheson and Hutchinson Whampoa, as well as the regional offices of some of the world’s largest multinational corporations.  However, the vast majority of economic activities in Hong Kong are carried out by businesses with less than twenty-five employees.  In keeping with a collectivist culture, these businesses are invariably family-owned and family-run.  But Hong Kong is also highly entrepreneurial.  Sons and daughters and siblings and cousins in family-owned businesses – and many others – are continually striking out on their own to start a new business and “have a profit by nightfall.”  Opportunities are seldom overlooked, and competition is keen.

Today, as a free trade country that is dependent on international trade and finance, Hong Kong is highly exposed to the fluctuations of the global economy.  And yet, its increasing integration with the economy of China, through trade, tourism, and financial links, helps to temper these fluctuations.  As a result of China’s easing of travel restrictions for Hong Kong, the number of mainland China tourists to Hong Kong surged from 4.5 million in 2001 to 28 million in 2011, outnumbering visitors from all other countries combined.  Hong Kong has also established itself as the premier stock market for Chinese firms seeking to list abroad.  In 2011, mainland Chinese companies constituted about 43 percent of the firms listed on the Hong Kong Stock Exchange and accounted for about 56 percent of the Exchange’s market capitalization.  In addition, while much of Hong Kong’s manufacturing industry moved to the Chinese mainland during the past decade, its service industry nonetheless grew rapidly.

Hong Kong’s energetic population of about seven million people, 95 percent of them Chinese, occupy only about 426 square miles of land area, most of them crammed onto Hong Kong Island and the Kowloon Peninsula, making Hong Kong the most densely populated country in the world after Singapore.  As a center of international trade, there is also an appreciable expatriate community.  The written Chinese language of Hong Kong consists of Chinese characters, either in traditional or simplified form, which can be read by all educated Chinese.  Spoken Chinese, however, comes with many dialects, and in Hong Kong, Cantonese is the spoken dialect, while much of mainland China speaks Mandarin, China’s official language. 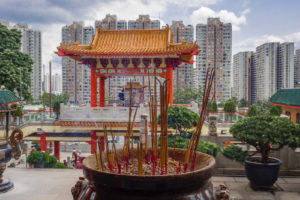 An important characteristic of Hong Kong Chinese is that they tend to be superstitious.  There are lucky and unlucky days, places, colors, objects and events.  One of the most interesting beliefs (held also by many across China and beyond) is that the design of homes and offices, their color schemes, and the placement of doors, windows, plants and furniture, can have a profound effect on the inhabitants’ well-being and fortune.  This is the philosophy of feng shui, (pronounced “fung shway,” literally “wind and water” in Chinese), an intricate blend of pragmatism, aesthetics, and superstition that has its origins in the Yellow River Valley region of China thousands of years ago.  Stories abound of cases in which a company’s or household’s ill fortune persisted until changes were made on the advice of a feng shui diviner, or “geomancer.”  In these stories, good fortune returns after furniture blocking doorways is moved to encourage the approach of opportunities, clutter is removed to promote a feeling of order and control, outside noise is reduced to minimize alien influences, or desks are moved to give a wide view of an entrance in order to provide a sense of security.

Hong Kong continues to be one of the world’s foremost international business centers.  Concerns remain over China’s willingness to tolerate Hong Kong’s democratic political processes and capitalistic institutions, currently and following the fifty-year term of the “two systems” bargain, but today these concerns mostly take a back seat to business.  Business is in the air.  Throughout Hong Kong people are buying, selling, trading, planning, and plotting.  There is a profit to be had by nightfall.